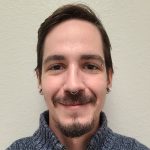 Zach was a multi-sport athlete; sports have always been an integral part of his life. He became interested in athletic training after shadowing his high school athletic trainer. Zach decided that he wanted to pursue a career focused on athletes’ health and well-being, so he went on to attend Mars Hill University, where he graduated with a Bachelor of Science in Athletic Training in 2016.

While he is away from Atholton and the clinic, Zach likes to remain active by playing sports, going on hikes, or he will relax while playing video games with friends and family.