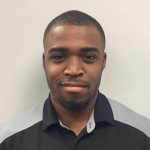 Marcus X. Patterson is an athletic trainer at Howard High School in Howard County, Maryland, where he joined the Pivot team in October 2019. Marcus is an active member of the National Athletic Trainers Association (NATA). Before starting his professional career with PIVOT, Marcus worked as a Martial Arts Instructor and Camp Counsellor.

Marcus grew up in Bowie, MD, and has engaged in combat sports competitions since he was 12. His passions include martial arts, fitness, gymnastics, watching anime, playing video games, snowboarding, and videography. He enjoys filming and editing sampler and stunt choreography videos that include various stunts, acrobatics, and martial arts during his free time that he performs himself.