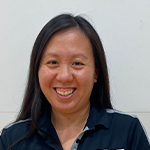 In her free time Lesley enjoys watching movies, cooking and reading.  She enjoys being outdoors and spending time by the water.