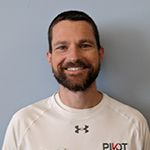 When Jared is not at Pivot or Walsingham, he enjoys biking, hiking, camping, and spending as much time as possible outside with his wife, Jennifer, and their 2 sons, Jaxson and Jamison.