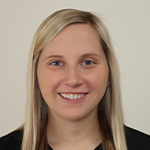 Diana is a graduate of Mid Valley High School. She earned her B.S. in Science with a concentration in Athletic Training from Marywood University. While at Marywood, Diana was a member of the softball team.

In her free time, Diana enjoys spending time with her family and dogs.