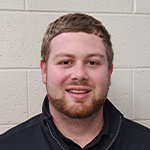 Derek Wilkins, LAT, ATC is an Athletic Trainer for Wyalusing Valley High School and works out of the Wyalusing Pivot Physical Therapy Clinic. He joined the Pivot team in June of 2017. Derek is looking forward to pursuing his Master’s degree in either Athletic Training or Kinesiology.

Derek attended King’s College in Wilkes-Barre, PA, where he attained a Bachelor of Science in Athletic Training. While pursuing his degree, he performed as a Division III basketball player for all four years of his education.