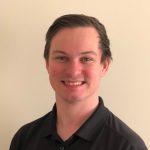 Daniel is a member of the MATA, MAATA, and NATA organizations. Daniel graduated from Towson University in 2018, earning his Bachelor of Science degree in Athletic Training with a minor in Health Science. During his time at Towson University, he worked with many different sports at Towson and neighboring schools and universities such as Johns Hopkins and the St. Paul’s School for Boys. Daniel’s passion for athletic training started in high school, where he shadowed his athletic trainer when he was not busy participating in cross country and wrestling.

Daniel was born and raised in Hawaii but has lived in Texas, New Jersey, and Maryland. Dan grew up in a Military family with one younger brother. Daniel is engaged to be married with a wedding date of June of 2021. Currently, his sport passion is disc golf, which he has recently picked up during the pandemic.