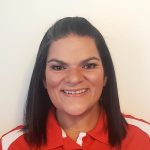 Amy Simmons Hope joined Pivot in August 2012, and has been the head athletic trainer for Colonel Richardson High School in Federalsburg, MD since 2013. Since working at Colonel Richardson High School, Amy helped them to become the first school on the Eastern Shore of Maryland to be Awarded the Safe Sports School Award with a 1st Team designation by the NATA. Prior to working at Colonel Richardson High School, Amy was the head athletic trainer for Cambridge South Dorchester High School while working with Pivot. Amy became the Sports Medicine Regional Coordinator for the Eastern Shore of Maryland and Delaware in July 2021. Amy loves being able to be a positive influence in the lives of her athletes and focuses a lot on the quality of care she provides as well as the relationships she builds.

When Amy is not working, she enjoys spending time with her husband and two daughters. She also enjoys reading, going to the gym, and dabbling in photography.