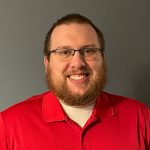 Zach joined ProCare Physical Therapy after PT school in March of 2016 and on through the transition to Pivot Physical Therapy. Zach has taken various continuing education courses furthering his knowledge of orthopedic diagnosis and treatment methods as well as attaining certification from the APTA as a Clinical Instructor for PT students. He is interested in pursuing further certification in industrial rehabilitation as well as attaining the Certified Orthopedic Manual Therapist (COMT) certification.

In his spare time Zach enjoys working on his home, hunting, amateur wood working, spending time with his family and friends, and playing with his two German Shepherds, Moose and Kylo.