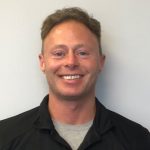 William Cintron is a licensed physical therapist assistant that received his degree from Delaware Technical Community College-Wilmington Camus in 2005. He joined Pivot in April 2017, when they merged with Dynamic Physical Therapy (where he had been employed since 2005). He is extremely well versed in a variety of diagnoses and treats a wide range of patients varying from pediatric to geriatric population.

William also worked previously at HCR Manor Care Pike Creek for 7 years providing inpatient rehabilitation. William is also a Clinical Instructor for fieldwork students for PTA programs. William is committed to continuously educating himself in the realm of Physical Therapy.

William is originally from Northern Delaware and moved to Lewes in 2016 with his wife who is a licensed Certified Occupational Therapist Assistant for the Milford School District. William has been married since 2014 and has one son. He is dedicated to staying healthy and works out daily. He enjoys spending time with his family, beach life, grilling and supporting all Philadelphia sports teams.