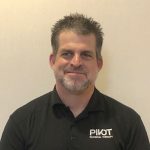 Todd Conway, PTA, ATC is a staff physical therapist assistant at Williamsburg PT/Advance Specialty Center. He has been a licensed PTA since 1992, certified athletic trainer since 1997. Todd has been with the Pivot/Tidewater Physical Therapy organization  since 1992.

Todd grew up in New Hampshire. After high school he  enlisted in the US Army and spent most of his time at Fort Bragg , NC. After his time in the military he moved to Northern VA to go to school. He moved to Williamsburg in 1992 when he joined Pivot/Tidewater Physical Therapy. Todd earned his Physical Therapist Assistant degree from Northern VA Community college in 1992 and a Bachelor of Science in Athletic Training  from Virginia Commonwealth University in 1997.

When Todd is not working hard at the clinic you can find him working at the local bike shop on the weekends. He spends most of his free  time road cycling and mountain biking. He is married and has three children.