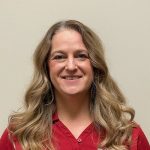 Rachelle Porath, PT, Cert MDT, joined Pivot PT in March 2019 in the Fayetteville/Raeford area then transferred to Pivot PT in Clayton in August 2019. Rachelle has worked in outpatient orthopedics for the majority of her career treating a wide variety of orthopedic conditions and specializes in treating disorders of the neck and back, teaching patients how to self treat the current problem and helping them to gain knowledge on how to minimize the risk of recurrence.

Originally from Michigan, Rachelle graduated with honors from Central Michigan University in 1994 earning her Bachelor of Science Degree in Biology. She continued her education at CMU and completed her Master of Science Degree in Physical Therapy in 2001. In 2008, she earned her credentialing certification in Mechanical Diagnosis and Therapy (MDT), otherwise known as the McKenzie Method, which is an internationally acclaimed method of assessment and treatment for spinal and extremity pain developed by New Zealand Physiotherapist Robin McKenzie and has been widely used all over the world for more than 30 years.

Although Rachelle traded in northern winters for North Carolina sunshine, she and her husband, Jason, continue to be avid Green Bay Packers fans.  She and her husband and three children enjoy traveling, camping, golfing, biking, and relaxing on the Carolina beaches.