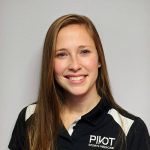 Rachael is a licensed Physical Therapist Assistant at Pivot Physical Therapy. She first joined the Pivot Team in 2013 as a PT Tech and Front Desk Receptionist prior to obtaining her license in 2017. While in PTA school, Rachael held clinical rotations in mainly outpatient orthopedic and sport settings, including a rotation at Pivot’s Prince Frederick office.

Rachael obtained her Sport Exercise Science degree in 2014, before pursuing her Physical Therapist Assistant license. She graduated from the Chesapeake Area Consortium for Higher Education program in May 2017 with her associates degree from College of Southern Maryland in Physical Therapist Assistant, obtaining her license in July 2017. Rachael rejoined the Pivot Physical Therapy team in September 2017. She is eager and excited to continue her career with Pivot in Southern Maryland where she grew up. She has attended continuing education courses for joint mobilizations and wishes to pursue further education/certifications in manual techniques, IASTM , TMJ, dance therapy and canine rehab. She recently became Orthopedic Specialization certified in October 2019.

In Rachael’s free time she enjoys arts and crafts, hiking, boating, beaching and spending time with her family and friends.