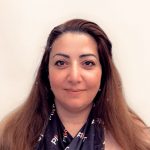 Nisrin, a member of the American Physical Therapy Association as well as the physiotherapy societies of Jordan and UAE respectively, is a highly qualified and professional physical therapist at our Lansdowne location in Maryland. In addition to guiding people through proactive exercises, Nisrin provides individualized hands-on service. As such, she has a Certification in Orthopedic Manual Therapy (COMT) and is also certified provider of Graston Technique along with Mulligan Manipulation. Nisrin enjoys working with a wide variety of cases, and has extensive experience working with individuals suffering from neurological-related conditions and ACL injuries in athletes. As a part of her dedication to the physical therapy field, Nisrin continues to participate in numerous trainings and seminars. This continued education ensures that Nisrin remains aware of new literature on modern techniques and treatments, and has led to the utilization of advanced kinesiotaping methods (producing relief and reduced inflammation). Nisrin uses her breadth of knowledge to optimize and personalize each treatment session for her patients.

Nisrin grew up in a household of medical professionals, which helped plant the seed and cultivate her interest in the field. Beginning in early adolescence, she assisted at both of her parent’s practices and started to learn the intricacies of working in healthcare. It was during this time that she discovered her passion for helping others. In 2003, Nisrin graduated from the Jordanian University of Science and Technology, one of the highest-ranking schools in the region, with a Bachelor of Science in Allied Health, specializing in Physiotherapy. Soon after, she worked with patients at a prominent private practice while conducting research on neuropathic pain under the affiliation of the Neurological Science Department at the Hashemite University. In 2007, Nisrin earned her Master’s degree in Physical Therapy from the New York Institute of Technology (NYIT) with highest distinction. In the following four years, she acted as the lead physical therapist at a facility for post-ACL reconstruction accelerated rehab in the athlete population, started her own private practice where she treated a plethora of cases. In 2012, Nisrin took up a position as the Director of the Department of Physical Therapy at a hospital in Dubai, UAE before moving to Maryland in 2013. In 2017, Nisrin joined the Pivot Physical Therapy family and became a Clinical Director in 2020. Since then, Nisrin has continued her work of helping people who suffer from pain.

When she manages to find spare time in her busy schedule, Nisrin enjoys cooking for family and friends, taking her 8-year-old son to SkyZone, listening to classical music, and dancing.