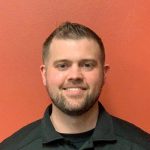 Nate Powers, DPT is the Clinic Director and a Physical Therapist at Pivot Physical Therapy in Athens, PA. He joined the Pivot team in March 2017, and previously worked for ProCare Physical Therapy since 2014, prior to their merger with Pivot. Nate has extensive experience in treating orthopedic diagnoses and patients who are post-operative/post-injury. He utilizes various forms of treatments including: IASTM, SFMA, McKenzie exercises, Duffy Rath, and spinal mobilizations among others. Nate has his Direct Access license in the state of Pennsylvania.

Nate enjoys spending valuable time with his wife and daughter, and his hobbies include running, working out, watching sports, and attending Philadelphia Eagles games with his friends and family.