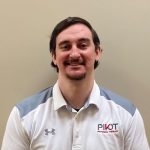 Mike was born in Newport News, Virginia. Growing up he played baseball, soccer, and wrestled. During his first year in high school, he developed knee pain and went to physical therapy. It was at this time he thought the physical therapy profession seemed like a fun way to make a living. The care he received from his physical therapist helped him get better and return to the field of play. He received his Bachelor’s Degree in Kinesiology from James Madison University in 2005. While at James Madison, he worked as a Student Assistant with the Strength and Conditioning Department from 2004-2005 earning the Student Assistant of the Year Award in 2005. Following his graduation from James Madison, he served as Assistant Strength and Conditioning Coach at Christopher Newport University from 2005-2006. From there, Mike moved on to work for the local government sector serving as the Senior Fitness Trainer for James City County from 2006-2016 and Parks Supervisor for Warhill Sports Complex from 2016-2017.

Mike is a competitive person by nature, but his philosophy is to keep things light and fun when treating patients. He feels that humor can go a long way on the road to recovery, while focusing on educating patients and getting them to feel better.

In his free time, Mike enjoys spending time with friends, reading, hiking, and working out.