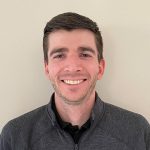 Mike joined the Arnold, MD office in August 2019, however he has been a Pivot team member since 2014 where he began working as a PT tech gaining experience in the field while finishing his degrees. As a Physical Therapist Assistant, Mike believes in unique, patient specific rehab programs and providing 1-on-1 care. Growing up in Severna Park and now as an Arnold resident, Mike loves being able to give back and provide care for members of the community he grew up in.

Mike began his schooling at Coastal Carolina University where he graduated with a degree in Exercise & Sport Science in 2013. Mike then attended the Chesapeake Area Consortium for Higher Learning (CACHE) Physical Therapist Assistant program through Anne Arundel Community College and graduated in the spring of 2019. In the future Mike plans on completing an orthopedic specialization certification program and continuing to expand his knowledge as a PTA.

In his free time Mike enjoys traveling with his wife, getting out on the golf course, and spending time on the water.