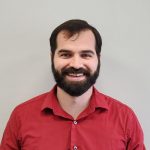 Michael Eaton joined Pivot Physical Therapy as a physical therapist in June of 2019 at the Roanoke Towers, VA location. Michael is an avid sports fan, having played basketball and soccer in high school, driving his interest in treating the athletic and active population. He also tries to implement sport-specific and functional techniques with all of his patients, especially those presenting with fall risk, to make therapy more enjoyable.

Michael grew up in Fort Thomas, Kentucky and attended the University of Louisville. While there, he earned a Bachelor of Science in Sport Administration. In addition, he was a member of the Phi Delta Theta Fraternity and was a student manager for the women’s basketball team for two years. Michael took time off prior to starting physical therapy school and during that time he served as an assistant varsity high school girls’ basketball coach and a freshman boys’ soccer coach. With family support, Michael moved to the Virginia Beach area, where he received his Doctorate of Physical Therapy degree from Old Dominion University. In his free time, Michael enjoys hiking, traveling to different national parks, competing in recreational sports, participating in trivia events and spending time with his family.