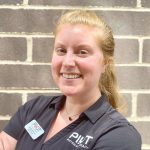 Meredith is the newest Physical Therapist at Pivot Physical Therapy in Westchester Commons! She joined us in June 2021. She is a licensed PT, and has her doctorate of physical therapy. She is interested in swimmers and athletes of all ages. She is a member of the American Physical Therapy Association (APTA). Meredith plans to dabble in a variety of different continuing education experiences throughout her career. This is her first PT job!

Meredith earned her Doctorate of Physical Therapy from Virginia Commonwealth University in May 2021. At VCU, she was able to gain experience in acute care and outpatient PT. She graduated Magna Cum Laude from the University of South Carolina with a Bachelor of Science in Exercise Science in May 2018.  While at the University of South Carolina, Meredith competed as a member of the Women’s Swimming and Diving team.  During her freshman season, she placed 3rd in the 200 freestyle at SEC Champs, and later competed at the 2015 NCAA Championships.  Prior to college, Meredith trained at Quest Swimming in Midlothian, VA.  In 2016, Meredith qualified for and competed in the U.S. Olympic Trials in the 50m freestyle.

In her spare time, Meredith enjoys spending time with her family, friends, and golden retrievers (Sandy and Ginny).  She attends RVA Performance Training and rides her bike on the Capital Trail.  Although she no longer competes in swimming, Meredith maintains a connection to swimming by teaching swim lessons.  She has also been an assistant coach at a local private school. Meredith enjoys hiking, paddle boarding, and being outdoors.