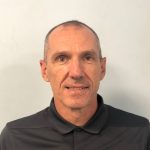 Matt is a 1987 graduate of Randolph-Macon College with a degree in Biology and a former R-MC soccer player. In 1990, he graduated from VCU’s School of Physical Therapy at the Medical College of Virginia. In 2002, he received his Master’s Degree in Orthopedic Physical Therapy, and in 2010 received his Doctorate degree also from the Medical College of Virginia.

He achieved Board Certification in Orthopedic Physical Therapy from the American Board of Physical Therapy Specialties in 1996. In November 2019 he became certified in Blood Flow Restriction Rehabilitation. He is also a member of the Orthopedic Research of Virginia, Graduate Education Medical Committee assisting in overseeing function of the orthopedic fellowship program.

Matt specializes in rehabilitation of all orthopedic and sports related injuries with a special interest in the upper and lower extremity biomechanics, post-operative rehabilitation, and orthotic fabrication. He has been a clinical assistant professor at the VCU School of Physical Therapy and annually takes on supervision of VCU physical therapy students in the clinic. He has been on the Board of Associates at Randolph-Macon for over 10 years and is now serving as chairman of the board. Matt annually provides internship opportunities for Randolph-Macon students and has seen a number of his students move on to become physical therapists.

Matt is married to Jennifer, a pediatric physical therapist, and together they have four adult children.  Besides volunteer time at Randolph-Macon, he has made many trips to Haiti, assisting in developing, organizing, and teaching in a Haitian physical therapy clinic. While at home he enjoys his time with his family and cycling.