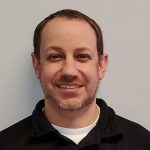 Kevin Sharp is the clinic director at Middletown Sandhill Drive.  Kevin started at Pivot Physical Therapy in 2017 and has worked in the field since 2006.   Kevin specializes in treatment of the neck and low back   He is a McKenzie certified therapist.  He also has extensive knowledge in treatment of joint replacements, sports rehabilitation, along with treatment of a wide range of musculoskeletal injuries.

Kevin lives in Middletown with his fiancé, her daughter, and two dogs.  Kevin enjoys retro video games, following sports, watching movies, and spending time with family.  He loves cheering for the Miami Dolphins and Philadelphia Phillies.