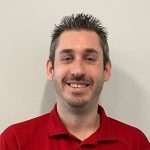 Kevin Kolly, PT, DPT is the Clinic Director of our Holly Springs, North Carolina location. Kevin joined Pivot Physical Therapy in the summer of 2012 as a staff therapist in Eldersburg, Maryland. He then transitioned to the Clinic Director role in October 2013 in Crystal City, Virginia.

Kevin treats a wide range of orthopedic and sports pathologies with a special interest in shoulder, knee, and ankle impairments. During the course of his career, Kevin has treated patients from all age groups, as well as professional athletes. In the spring of 2012, Kevin traveled to the island nation of Trinidad and Tobago where he helped rehabilitate members of both the men’s and women’s West Indies international cricket teams and Trinidad and Tobago Olympic track and field teams. He also had the pleasure to assist with the treatment of the 2012 and 2016 men’s javelin Olympic gold medalist Keshorn Walcott.

Kevin is a native of upstate NY. He earned a Bachelor’s Degree in Biology from the University of Albany and a Doctorate in Physical Therapy from Utica College. In his spare time, Kevin is an avid golfer, loves spending time with family and friends, and loves the outdoors.