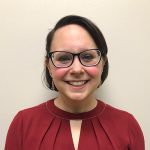 Kelly Grunstra, MS, CCC-SLP is a Speech Language Pathologist who works in the Dickson City clinic. She has been part of Pivot Physical Therapy since January of 2017. Upon graduating with her Masters Degree, Kelly worked at John Heinz Rehab Hospital as an in-patient SLP, where she specialized in Traumatic Brain Injuries. After almost two years at John Heinz, Kelly worked with NEIU#19 in early intervention. Kelly worked in early intervention for five years when given the opportunity to fulfill her dream of working with both adults and pediatrics here at Pivot Physical Therapy.

Outside of working in a profession she loves, Kelly greatly enjoys traveling, backpacking/hiking, kayaking, hunting, and volunteering. She highly values spending quality time with family and friends as much as she can.