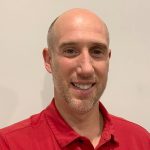 Joe moved around a lot with his military family, and is happy to make Williamsburg his home. He feels a great pride towards the Williamsburg Community, and believes it is a privilege to provide superior physical care in Williamsburg, Virginia.

Joe went to Poquoson High School. He earned a Bachelor’s of Science in Exercise Science from George Mason University, and his Doctor of Physical Therapy from the Medical College of Virginia/Virginia Commonwealth University in Richmond.

During his free time, Joe is up for anything active. Playing golf, working out, a pick up game of basketball, skiing, hiking, volleyball, going to the beach, and of course spending time with his wife, three kids, and two dogs.