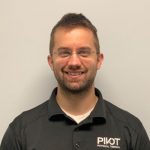 Jeremy McCullough, PT, DPT, CSCS, joined Pivot Physical Therapy in May 2017 as a Physical Therapist and transferred to Culpeper, VA to open the new clinic in May of 2018. His passions include anatomy and movement, which lead him to certify in the Selective Functional Movement Assessment to help diagnose movement dysfunction. Jeremy also is a Certified Strength and Conditioning Specialist through the National Strength and Conditioning Association, which has helped his strength programming for all orthopedic and sport cases.

In 2014, Jeremy graduated from Louisiana State University receiving his Bachelor of Science in Kinesiology. He then completed the Doctor of Physical Therapy program at Duke University in 2017, where he had experiences performing movement screenings on professional athletes. As part of his training, Jeremy worked with Duke University student athletes and United States soldiers in the Special Forces stationed at Fort Bragg.

When Jeremy isn’t in the clinic, he can be found spending time with his wife and two daughters. He enjoys cooking, reading, running, or playing outside.