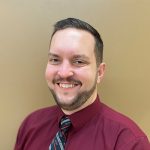 Jason Dwyer, PT, DPT is a physical therapist at our Moscow, PA location. Jason graduated from Arcadia University in February, 2009. Prior to graduating with his Doctor of Physical Therapy Degree, he earned his Bachelors in Biology in 2006. Jason began his career in Levittown, PA, a suburb of Philadelphia treating hand injuries and general orthopedic cases. He joined ProCare/Pivot in 2013 working in our Carbondale and Avoca offices.

Jason spends his free time with his wife and three sons. He enjoys spending time outdoors, camping, and hunting. He enjoys watching football, following Penn State and the Philadelphia Eagles.