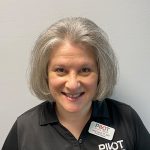 Janet Caputo PT, DPT joined PIVOT Physical Therapy on July 5, 2016 as an associate at their Clarks Summit, PA office. Prior to PIVOT, Janet worked in multiple settings including inpatient, acute and long term rehabilitation as well as home health but most recently appreciated the title of (or functioned as) Clinical Director at Mackarey and Mackarey Physical Therapy Consultants, LLC (MMPTC) from 2000 until 2015. During her association with MMPTC, Janet fostered a motion analysis program, promoted a lower extremity closed chain biomechanical assessment, pioneered a vestibular rehabilitation program with the cooperation of local audiologists and otolaryngologists and cultivated a comprehensive foot and ankle program with the assistance of local podiatrists and podiatric surgeons.

Janet considers her professional career as a vocation rather than a mere occupation but relishes free time with her husband, Attilio Laschi, and mother, Leona Caputo. Janet enjoys caring for her mother, the culinary arts, gardening, hanging out with her seven nephews, playing with her Goddaughter Alyssa and socializing with fine wine and good friends.