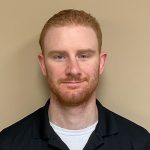 Eric has been at the Hawley Pivot office since 2019. He graduated from Misericordia University in 2015 with his Bachelor’s degrees in Business Administration and received his Doctorate in Physical Therapy in 2018. Throughout his time at Misericordia he was a member of the men’s lacrosse team and served as team captain for the 2015, 2016 and 2017 seasons. Eric also served as a volunteer assistant coach for the 2018 season. During PT school, he also volunteered with Rock Steady Boxing in Old Forge, PA and conducted research focused on patients with Parkinson’s.

In his free time Eric enjoys skiing, golfing and hiking. With his background in athletics and current active lifestyle, Eric enjoys working with a wide array of orthopedic diagnoses. Eric also enjoys treating vertigo/vestibular cases as well as patients with Parkinson’s disease.