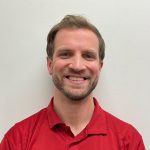 Dylan Thorne is a physical therapist at the Aston, PA clinic. He joined Pivot Physical Therapy as a clinic director for the West Side Middletown clinic in June 2016 and transferred to the Wilmington-Washington Street clinic where he served as the clinic director for 2 years. He specializes in orthopedics, myofascial release, sports medicine and trigger point dry Needling. He earned his MTPT certification for trigger point Dry Needling from Myopain Seminars in June 2017. Dry Needling is a therapeutic technique for decreasing taught bands of muscle that can refer pain to specific areas of the body and cause dysfunctional movement patterns. He is also a Selective Functional Movement Screen provider. The SFMA is a systematic tool used to identify movement impairments and direct treatment. He has taken courses in functional movement screening, lower extremity Mulligan Mobilization, Mckenzie method, pre-participation screening for athletes, concussion management, myofascial release and trigger point dry needling. Dylan prides himself on providing optimum care with the most current evidence-based practice and one-to-one care.

Dylan earned a DPT in 2013 from the University of Delaware where he also completed his undergraduate coursework and research involving treadmill training for individuals with stroke. He has worked for over 4 years in an outpatient sports and orthopedics setting. He has also worked with high school teams before the athletic season to screen for injuries using the Functional Movement Screen (FMS) and prescribing corrective exercises for injury prevention.

Dylan enjoys exercising and watching movies at home in his spare time. He lives with his wife, Jena, son Jameson and dog Jax in Folsom, PA.