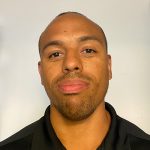 Donald has worked as a personal trainer for over a decade improving people’s lives through exercise. In 2016, he was one of five undergraduates to be part of Winston Salem State University’s inaugural Honors program, conducting an undergraduate thesis statement while playing collegiate football. He would graduate with honors with his Bachelor of Science degree in Exercise Physiology.  He then received his Certified Strength and Conditioning Coaching Certification (CSCS) after being conferred his degree. Donald would later go on to graduate from South College of Knoxville in 2020 to receive his Doctor of Physical Therapy (DPT). His interest in the musculoskeletal system has sparked a desire to one day receive board specialization in the orthopedics sector. Donald has experience working in hospitals, nursing facilities, local gyms and Division 1 facilities and has worked with people of all ages and impairments.

When he’s not working, the highlight of his life is his girlfriend Inna and his three daughters; December, Daelyn and Emma. Donald enjoys staying active with Olympic weightlifting, powerlifting and playing basketball. He hopes that his role as a physical therapist can inspire his three daughters to be a difference maker in people’s live and pursue a healthy active lifestyle of their own.