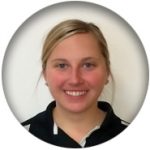 Diana Butash, LAT, ATC is a Certified Athletic Trainer at Lakeland Jr. Sr. High School in Scott Twp., PA and works in the Carbondale Pivot Physical Therapy clinic. She is a member of the National Athletic Trainer’s Association. Diana is SFMA certified and is interested in furthering her education by becoming certified in FMS.

Diana graduated from Marywood University in Scranton, PA in 2014 and received her Bachelor of Science degree in Athletic Training. There she worked with high school and collegiate athletes in a variety of different sports. She also did a cardiac internship at the Carbondale YMCA. While attending Marywood University, Diana was a four year member of the softball team where she earned many athletic achievements and awards including team captain and team MVP her senior year. Also in her senior year, her team won the conference championship and advanced to NCAA playoffs for the first time in school history.

In her free time, Diana enjoys spending time with her fiance, family, and friends, especially her two miniature poodles that she recently rescued. She also enjoys working out and spending time outdoors.