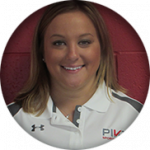 Christy has been employed by Pivot Physical Therapy since 2010 and was named Sports Medicine Coordinator in 2013 and Director of Sports Medicine Operations in 2014. She also serves as the athletic trainer at Urbana High School where she strives to provide the highest quality of care to her student athletes and the Urbana community on a daily basis.

Prior to coming to Pivot Physical Therapy, formerly Maryland SportsCare & Rehab, Christy worked at North Carolina Wesleyan College where she served as head athletic trainer for women’s volleyball, basketball and lacrosse. Over the past 4 years Christy has been an integral part of developing, implementing and educating others on a standardized concussion protocol in Frederick County by building relationships with local doctors, communities and youth groups, and coordinating the Pivot Physical Therapy Summer Symposium for athletic trainers. She enjoys taking continuing education classes in order to incorporate new techniques and skills into her daily practice as well as learning about the psychology behind athletics. Christy also enjoys serving as a mentor to students in her Student Athletic Trainer Program who want to pursue athletic training in college and their future.

A 2004 graduate of Century High School, Christy went on to Greensboro College where she played lacrosse and obtained her Bachelor’s Degree, majoring in both athletic training as well as exercise and sports science with a concentration in sports psychology and a minor in psychology. She then went on to pursue her Master’s Degree in athletic training in 2009 from Ohio University. There she served as a graduate assistant for the OU football team and women’s volleyball team.