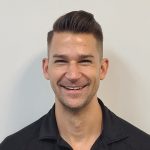 Christopher J. Kosobucki is a physical therapist at Pivot Physical Therapy. He is proficient in custom orthotics fit and fabrication for a variety of orthopedic conditions and specializes in manual therapy techniques, specifically with respect to spine, shoulder, foot/ankle, knee, and hip pathologies. Chris has a strong presence with local Chapel Hill athletic groups, including high school baseball and cross country/track programs. He has also acted as a liaison for clients of a local running shoe store.

Chris began his career working in a private outpatient orthopedic clinic in Chapel Hill where he developed his skills in general outpatient orthopedic/sport medicine physical therapy. In 2005, Chris became a Certified Strength and Conditioning Specialist (CSCS) through the National Strength and Conditioning Association. In 2007, he became a board certified specialist in Orthopedic Physical Therapy (OCS) by the APTA, a credential held by less than 4% of all licensed therapists in the U.S. In 2008, Chris completed his certified Clinical Instructor certification through the APTA. In April 2010, Chris completed all educational requirements and became recognized as a Maitland Australian Certified Orthopedic Manual Therapist (COMT). The Maitland Approach is a world-renowned, highly effective, gentle approach to the management of neuromuskuloskeletal conditions. As of this time, with this distinction, Chris is one of less than one percent of physical therapists practicing in the U.S. and fewer than 30 therapists in North Carolina.