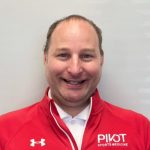 EJ Scofield, PT is the Clinic Director at our Centre Park location in Columbia, MD. EJ joined Pivot in 2014 ago and worked as a staff physical therapist at the Knoll North location in Columbia. He has over 10 years of experience working in an outpatient sports medicine setting.

Prior to joining Pivot, he was the clinic director for 3 locations of a private practice in Montgomery County. He also served for 8 years as the team physical therapist for Damascus High School and 3 years as the team physical therapist for the basketball team at Montrose Christian School. During that time, EJ assisted in guiding Damascus to 2 state football championships and 1 ESPN national championship for Montrose Christian.  He has worked with athletes at all levels, including professional. He has a particular interest in utilizing manual therapy techniques and therapeutic exercises to create optimal biomechanical movement.  EJ specializes in treating youth athletes, field management of sports injuries, ACL prevention in youth athletes and increasing speed and agility.

In his free time, EJ enjoys spending time at Deep Creek Lake and Ocean City, MD with his wife, son and dog. When home in Howard County, he spends time cheering for the Terps, Ravens and Orioles. He also is an avid golfer, snow skier and wakeboarder.