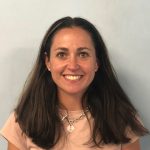 Originally from Stafford, VA, Angela earned her Bachelor of Science degree in exercise, sports and health education, with a concentration in Sports Medicine from Radford University. While earning her degree Angela was a Division-1 scholarship athlete and team captain of the field hockey team. Angela received her Doctor of Physical Therapy degree from Virginia Commonwealth University in 2009. She completed research on cervical spine disorders and thoracic outlet syndrome and became board certified in orthopedics in 2016. Angela worked at Ashland Physical therapy from 2009-2015. Prior to returning to Ashland Physical Therapy in 2019, she worked in Fredericksburg for 4 years as clinical director and physical therapist. During her career, she has served as a clinical instructor for doctorate physical therapy students and treated the spectrum of orthopedic and sports injuries.

In her free time, Angela enjoys spending time with her husband and three boys, running and reading.