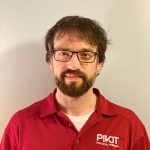 Adam Powell is from Newport News, Virginia. He came to Richmond, Virginia in 1999 to attend Virginia Commonwealth University where he fell in love with the city and with a beautiful girl named Erin.  She would soon become his wife and the mother of his two amazing daughters, Jane and Ellie.

Adam received his bachelor of science degree from VCU and then graduated from the VCU Medical College of Virginia School of Physical Therapy in 2007. Adam joined Rehab Plus Associates in 2007, having interned there as a student, and since then has transitioned with the company through acquisitions to ultimately work for Pivot Physical Therapy starting in 2017.

He lives locally in the North Chesterfield area and enjoys spending time outdoors with his family as well as playing the drums with his band WKNDR.

Adam holds a direct access certification and is available to evaluate and treat patients without a prescription from a physician, so just give him a call.