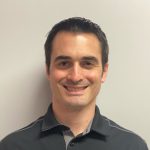 Adam was born and raised in Lewisburg, PA and graduated from Lewisburg Area High School in 2003. His passion for sports medicine and rehabilitation led him to Penn State University where he received his Bachelor of Science in Kinesiology with a focus in Movement Science. Adam then received his Doctorate of Physical Therapy from Lebanon Valley College in 2010.