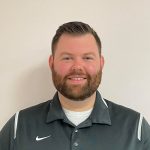 Adam began working for Pivot Physical Therapy in March of 2020. He is the Clinic Director of Pivot’s Sinking Spring, PA clinic. He graduated with his Bachelor’s Degree in Health Science with a Psychology minor in 2012 and Doctorate of Physical Therapy degree in 2014 from Lebanon Valley College.

Adam has been practicing Outpatient Physical Therapy exclusively since graduation. He has certifications in the Selected Functional Movement Assessment (Level 1 and 2) and Functional Movement Screen which helps determine functional limitations and poor movement patterns which can be treated in a more efficient manner with an emphasis on regaining functional independence.

Adam is a Berks County native where he graduated from Central Catholic High School in 2008. Adam enjoys golfing, hiking, cooking and attending Naval Academy football games with his wife, Melissa, and friends.